Thank you for contacting us! If needed, you will hear back within 48-72 hours.

I know two songs; one is "Blue Hawai'i" and the other isn't

We should work together. Shoot me a message today! 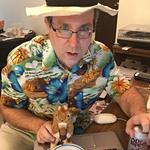 ​​and I’m an eclectic musician based in Cleveland, Ohio.

I believe in the power of music. And squirrels. But mostly music.
​
It's long since time for me to develop this website into something functional. Most of this will focus on my outside musical exploits, but I like this template so here it is.

Soon this site will actually do things and stuff, but I want to make sure the page is up and mildly functional. This page is under development and elements will change.

With a focus on Tahitian and Arab instruments and techniques

baldwin wallace (2013)
Clearly did not come with lessons on how to use GoDaddy website templates.
barbershop singer
musician (mostly TAHITIAN LOG drummer, plus a little ukulele)
View on Mobile